If you give people the opportunity to vote for something, they expect their votes to count.

Whether voting in a national election, or for the office lunch, people want their voices to be heard and recognized.

This point was recently lost on the good folks at the Murphy-Goode Winery when they asked people to vote for their favorite candidate in their “Really Goode Job” search, but chose the second round candidates with apparent disregard for those votes.

The voters are still angry,  but they are not grabbing pitchforks and torches just because one particular video (Martin Sargent’s) was not chosen for the top 50.  (Maybe it seems that his voters are the only ones upset, because there are just so many of them.)

People are upset because they feel personally cheated – robbed of their time, energy, and attention (not to mention their email addresses).

If this is all new, my original post has links to help you catch up (http://www.tardyslip.net/h88)

You can continue reading.

Where: Fictitious ABC Middle School Cafeteria
Who: Students in grades 6-8 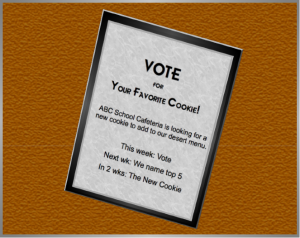 for
your favorite Cookie!
ABC School Cafeteria is looking for a new cookie to add to our desert menu…
This week:  Vote
Next wk: We name the top 5
In 2 wks:  The New Cookie

By Wednesday, the kids can hardly contain their excitement: The top cookie is Bacon Chocolate Chip!

By the end of the voting period, their top cookie candidate is so far out in from that the votes spill off of the chart!

On Friday afternoon, the students go home buzzing with anticipation.

On Monday morning, excitement quickly turns to dismay as they hear the principal announce the final five cookies:

Good Morning, students and staff.  We are pleased to announce the final five cookies and remind you that at the end of this week, our cafeteria staff will select the final cookie to add to our menu next week.  The final five are:

The students can not understand what has happened.  At lunch time, they clamor to the bulletin board, but everything has been removed.  Where are the original signs?  Where are the graphs?

When the students ask, they are told that the votes are just a “part” of the big cookie decision.

Of course, it is true that the cafeteria never claimed that student votes would be the only deciding factor. Surely, there was some list of “fine print” buried somewhere on the voting table. However, reasonable people were asked to do a reasonable thing: vote.  Expecting them to dig through pages rules, in addition to taking their time to explore and decide their favorites would not be a reasonable expectation.

The question is not whether the students (the customers) are right in feeling cheated.  Their feelings are real.  The question is whether anything could have been done to save these consumers and ease their disappointment.

What if the announcement had gone more like this:

We are pleased to announce the final five cookies::

What if the cafeteria had left the original votes intact and posted a simple explanation:

We shared your excitement over the voting and know that some of you will be disappointed with the results.  However, we have received new nutrition guidelines from the state which make it impossible for us to serve Bacon Chocolate Chip cookies.  We are sure that you are as disappointed as we are.  Hopefully, you will still enjoy our remaining choices.

As with the scenario above, Murphy-Goode could have retained many of their voters as consumers with just a bit of care.  Those who continue to yell that this is only about Martin Sargent’s fans is seriously deluded.

This might be a good time to let you know that I did not vote for Martin Sargent. (Sorry, Martin)   I would like to be able to go back and compare videos and numbers of votes, but alas, all of that has been removed – a fact that many consumers see as malicious – so that none of that is accessible.

There are many who feel let down by Murphy-Goode and they aren’t just telling their friends, they are telling everyone.  They are taking to the streets via Twitter, Facebook, Digg, FriendFeed, and their personal blogs.  Yes, many of them mention Martin Sargent.  A more careful exploration will give you much more.

Murphy-Goode: Not So Great After All

What Can You Do for Your Slackmistress