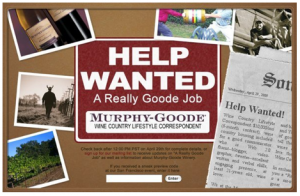 Someone at the Murphy-Goode Winery had an amazing PR idea. The execution of that idea (whether poor planning or someone’s crass indifference toward their customer base), has quickly become a nightmare.

It began with the advertisements

“…for an outgoing, web-savvy, articulate communicator to tell the story of the great mountain vines and artisan winemakers of California, tasting the “goode” stuff and experiencing the spectacular Sonoma wine country. The search has been covered by CNN, FOX, NBC, ABC, CBS and in hundreds of major daily papers and newscasts from London to India, thousands of blog and Twitter sites, and has drawn crowds when winemaker Dave Ready, Jr. visits select cities.” Murphy-Goode media release

Martin Sargent was one of  hundreds of applicants.  So what makes Sargent special?  Is it his application video?  His website? His vast social media (and other media!) experience?

When Murphy-Goode pared down the candidates to the “top” 50, Martin Sargent’s name was not on the list.  In his twitter feed, he graciously thanked his fans and congratulated those who would be continuing in the competition:

“Thank you all for your tremendous support!  But I am not included in the top 50 candidates for @areallygoodjob. Congrats to those who were.”

Martin’s graciousness did not spill over to his thousands of disappointed fans.

They feel cheated.  They feel betrayed. And they feel ready to pour their anger into their blogs while pouring “badde” wine down the drain:

“Murphy-Goode announced their top 50 for their really good job contest. The only problem is that @martinsargent wasn’t in it. So, for all those that voted, looks like your votes meant nothing to Murphy-Goode. Forget me, forget you Murphy-Goode!”

Then, Kevin Rose Tweeted the story:

“Wow, Murphy-Goode Winery (@areallygoodjob) just screwed @martinsargent (even though he won most votes)”

If anyone on the planet had missed the story, surely they didn’t miss Leo’s thoughts:

When and how do they start trying to dig out from under this mess?  The only thing found so far (and I have Looked!) is a Sunday morning Facebook note.  It got comments from nearly a dozen people.

Angry mobs wielding pitchforks and torches just can’t be ignored, but you might have more luck with them than with angry geeks wielding social media.

We will be watching to see how this plays out.

13 thoughts on ““Goode” Opportunity for PR is Lost on Winery”